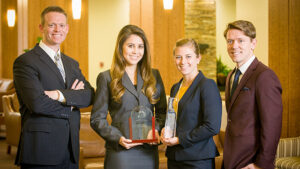 “The Texas Young Lawyers Association gave one professionalism award,” said Peter Leavitt, who coached the team. “When the award was presented, the bestower said, ‘There was a tie for first place, but it is okay that we only have one trophy, because the teams that tied are from the same school: BYU.’” Leavitt is a District Attorney for Salt Lake County.

After each round of the competition the judges were given a ballot to rank the teams on professionalism and civility.

“These students were not only the best advocates at the tournament, they won by playing fair, being polite, ethical, and professional,” Leavitt said.

A committee selected teams for the National Trial Competition during auditions held fall semester. Participating teams received the problem they were to address mid-November and began working evenings and weekends to prepare both the prosecution and the defense.

“It is a lot of work,” Messerly commented. “We all put in many hours working on our sides and trying to perfect our delivery. But, you always get thrown surprises when you’re there, so you have no idea what to expect. We have an excellent coach, Peter Leavitt, and he deserves all the credit and praise. His guidance was critical.”

“Overall, this was a major victory for BYU trial ad. We have officially put ourselves on the map. We are very excited about our potential in the national competition in March in Houston and for the future years of TYLA competitions,” Lamb said.