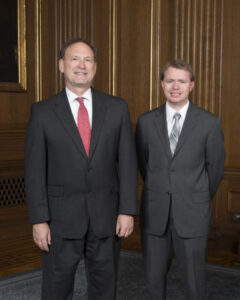 In late 2012, Associate Professor Aaron Nielson and his family were living near Washington, D.C. and preparing to move to Utah where he was going to teach at BYU Law.  Less than a week before they were to leave, he was invited to interview for a Supreme Court clerkship with Justice Samuel A. Alito, Jr. “If the Supreme Court calls, the answer is yes,” he said. Professor Nielson was hired for a one-year position, so after moving to Utah and BYU Law for a year, he and his family moved back to Washington, D.C. Now that the clerkship is over, they have returned to Utah. “Zig-zagging across the country was definitely worth it,” Professor Nielson jokes.

Professor Nielson learned a lot from the experience. As he explains it, working with the Justices is a chance to see some of the best legal minds in the world approach difficult issues. “One of the most astonishing aspects of clerking is when you’re in the room … [and] watch the Justices think,” Professor Nielson said.  “For me, that is one of the parts of the job where I still shake my head and say, ‘Wow, I got to see… their brains work.’” He described the experience as an astonishing, yet humbling, opportunity. “It’s an experience unlike any other in law,” he said.

Clerks play an important role at the Supreme Court. “As a clerk, you’re dealing with hard problems and doing your best to provide counsel to the Justice,” Professor Nielson explained. “You spend a lot of time in one-on-one conversation; you kind of get used to it by the end of the year, but it is a surreal experience.”

Surprisingly, despite the Supreme Court’s imposing image, it actually is a very welcoming place for clerks and their families. Professor Nielson made it a point to take his family to events there as much as possible. Every week, for instance, one of the chambers at the Supreme Court hosts a “happy hour,” where all of the clerks have dinner and talk in an informal setting. “Everyone becomes friends, and it makes for a much more pleasant working environment,” he said. Whenever “the Alitos,” as the four clerks for Justice Alito were called, hosted happy hour, they always invited the clerks’ families.

One of Professor Nielson’s favorite experiences was Halloween.  The Court invited all of the clerk’s children to come for trick-or-treating. Last year, Justice Antonin Scalia was in attendance, personally handing out candy to the dozen or so children in costumes.  This was just one of the many events families were invited to at the Court.  These events made a difference.  “My kids were always excited when they heard about the Supreme Court because it was part of their life,” ProfessorNielson explained. “When they talked about the Supreme Court on the radio, [my family] would always cheer, especially if they mentioned Justice Alito.”

One particularly memorable episode involved Justice Sonia Sotomayor.  One of Professor Nielson’s daughters learned about Justice Sotomayor in school. Afterwards, one of the Justice’s law clerks extended an invitation to meet the Justice in her chambers. Professor Nielson’s daughter spent fifteen minutes with Justice Sotomayor, who explained how to overcome adversity and find your place in the world. “It was an amazing experience for a seven year-old, 15 minutes of a Justice’s time,” Nielson said. “It’s the sort of thing that she’s never going to forget.”

Another valuable aspect of clerking at the Supreme Court is attending oral argument. Clerks work on the cases, read the briefs, get a feel for each of the competing positions, and then watch the argument. “You get to see some of the best oral advocates in the country,” Professor Nielson said.

Although he enjoyed many aspects of the clerkship, Professor Nielson focused on one in particular: “The highlight of the experience for me, the thing that made it most worthwhile, was getting to know Justice Alito,” he said. “Justice Alito is a good person to the core.” Nielson explained that seeing someone sincerely try to get it right makes you want to do a good job. Even before clerking for him, “I knew I respected Justice Alito from his work, but once I actually met the man, my respect only grew,” he said.

Professor Nielson strongly encourages students to clerk for judges all across the country. “Clerking is, for me, one of the most rewarding professional experiences I’ve ever had,” he said. The responsibility forces you to “do the best that you can.”