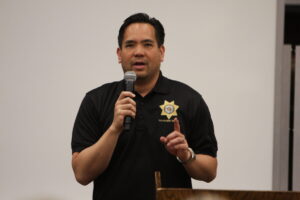 On March 31, 2015, Utah Attorney General Sean Reyes came to BYU Law to discuss the new White Collar Felon Registry. Once implemented, the registry would give those wary of white collar fraud an opportunity to search for names of known perpetrators. Reyes hopes to protect citizens from white collar crime with a tool to identify those who have committed such crimes in the past.

“Our community in Utah is particularly vulnerable,” Reyes said. “We have a disproportionate amount of affinity fraud, which we loosely define as exploiting a relationship of trust to take advantage of someone—in particular when it comes to investments. Per capita, we have the highest rate of affinity fraud in the world.”

Reyes described his focus on white collar crime in comparison to violent crimes. “They’re apples and oranges; one not more serious than the other. I would never dispute that violent crime is inherently evil, it’s horribly destructive. But white collar fraud, in other ways, is even harder on some. It takes longer to recover from.”

To those fearful that a registry might list some who “have paid their debt to society” and should not be publicly branded, Reyes provided an explanation of exempting caveats. “If they have paid their debt to society, they won’t be on the directory. Why? Because if you pay restitution, you don’t go on the registry. Or, if you’re making restitution—let’s say you’re already on the directory and you served your sentence, you’re on probation, you’re on parole, you’ve got a job and making good faith efforts to repay the victims—if you’re making good progress, we have discretion. We can take you off the registry.”

“Giving prosecutors and judges the discretion to give shorter sentences because there would be this protection in the community—that actually helps reintegration. It helps criminal justice reform, shortens prison sentences, helps those who really are turning over a new leaf get back out and make a positive impact on society. For those few who continue to re-offend, then they get to go back on the registry,” Reyes said.